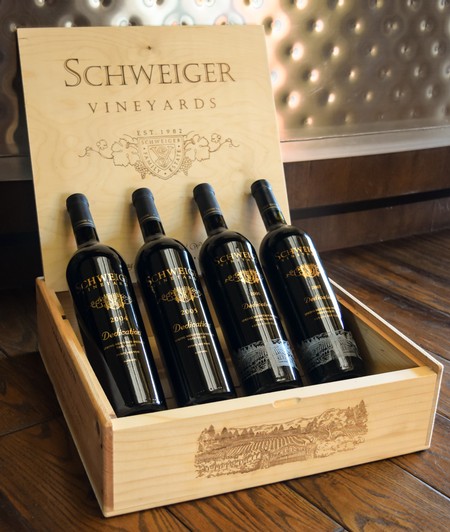 Become a Member of one of our Extended Family Wine Clubs. Free to join, members enjoy discounts, access to Club exclusives, complimentary tastings, invitations to events, and more.

In Stock
Be the first to review this item »

Back in the year 2000, Dedication™ was born with the vision of being a “reserve without taking away from the regular cuveé” line.  We’ve never liked the idea of holding back some of the best of your grapes to make an über-wine at the expense of the rest of your wine.  While we were successful in doing this with that vintage, we have not been able to do the concept justice.  Because of this, we decided to re-imagine the Dedication concept!  Schweiger Vineyards has become known as the champion of single varietal wines…but the question has always been out there…“what if?”  After all, my first winery jobs were helping to create world class blends like Insignia, Cinq Cepages, and Cain Five.  With that in mind, we set about relaunching Dedication™ as a blend of the traditional bordelaise varietals.

This wine offers rich blackberry, currant, plum and loads of jammy fruit with faint seasonings of oak, herbs, and minerals.  A core of sweetness emerges from the ripeness of our small-berried hillside fruit.  This generously proportioned wine expands as it moves through the palate with a seemingly endless finish.  Ultimately, what you’ll find is the classic Schweiger marriage of power and finesse.

Become a Member of one of our Extended Family Wine Clubs. Free to join, members enjoy discounts, access to Club exclusives, complimentary tastings, invitations to events, and more.