Item was successfully added to your cart

“What’s in a name? That which we call a rose

By any other name would smell as sweet.”

“Once you label me you negate me.

“I wish my name was Brian because maybe sometimes people would misspell my name and call me Brain. That’s like a free compliment and you don’t even gotta be smart to notice it.”

Back in November we announced that we were giving up our legal right to the name “Port”. As I was unable to attend the ceremony in

Portugal, Paula and I were invited by the Portuguese government to attend a ceremony in San Francisco where I was inducted in as a “Cavaleiro” or a knight. It was a lovely evening with some of the top Port producers from their country along with three other Napa wineries who were giving up their legal right. Now, as a “Cavaleiro”, I technically enjoy diplomatic immunity while inside Portugal, however, I think I’ll still keep under the speed limit.

Our contest to come up with the new name was a huge success with many great names submitted! Everyone in th

e family and staff looked over the names and it eventually one name stood out amongst the rest.

If you’ll recall, our Port is aged solera style. Each release takes past vintages which were incorporated in the previous release. We then blend in the most current release to create the new version…or a new iteration. The name stuck! 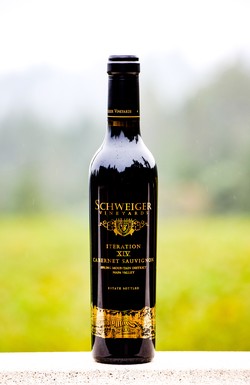 The numbering sequence shall continue. In addition, we have started some extended barrel aging programs on Iter

ation. In the summer of 2020, we will be releasing the first of these wines, 2009 Iteration, a single vintage dessert wine barrel aged for ten years.

We would like to thank …well, that’s the funny part. The person who came up with the name wished to remain anonymous. However, he or she received the first bottle of Iteration XIV off the bottling line along with five other current and library releases of our Cabernet Sauvignon dessert wine.

Commenting has been turned off.