Item was successfully added to your cart

What’s a nice chlorine molecule like you doing in a mold spore like this? (or...Andy's Portugal trip Part Two) 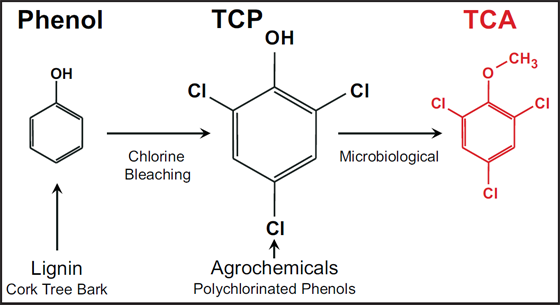 Before we jump into the Portugal trip, I thought it might be worth stepping back and looking at the greatest issue leading to winemakers choosing alternative closures over natural cork; the issue of cork taint. Simply put, when chlorine comes into contact with the lignin of the cork or with certain molds, an aromatic compound known as 2,4,6-trichloroanisole (TCA to its friends)(a similar compound utilizing bromine can also occur, but we’ll stick with Chlorine for this posting). TCA has a very characteristic odor ranging from moldy newspaper to damp cellar. Even at lower levels where you can’t detect the characteristic odor, the presence of TCA can mute the natural fruit aromas normally present.

When the cork is harvested, it is possible that there are already mold spores present on the tree (and plenty of lignin to go around). After harvesting, the slabs of cork traditionally were left on the forest floor to “age”, anywhere from 6 months to a year, before further processing…ample opportunity for mold to grow further. Once the bark is brought to a facility for processing, the bark would be boiled in water, with the intent of sterilizing the cork. One big problem; at the time, most facilities utilized chlorinated water.

So, many suppliers stepped up and realized this issue and stopped using chlorinated water. Cork taint persisted. This time, winemakers became introspective and looked at their own facilities. Some wineries had greater incidence of cork taint than others. Up until the early 1990’s, the sanitizer of choice inside the wineries was…good old Chlorine...and boy do some wineries have mold laying around. I remember when I was 18 working at WINERY NAME REDACTED; we would clean the barrel room at the end of every Friday by wetting the floor with a fire hose, putting on respirators, and sprinkling granular Chlorine all over the place, then scrubbing with brooms. We would then charge the firehose, sending it all down the drain and a fair amount splashing on walls and barrels…sure it all got down the drain eventually.

By the mid-90’s most wineries eliminated all chlorine from their cellar practices. Still some wineries had wood construction that was permeated with TCA. That infected wood would vent off the aromatic gas and it would penetrate barrels. These wineries were faced with gutting their facility, reconstructing, or in some situations, just putting out an inconsistent smelly product…and you wonder where $2 bottles of wine came from? Other facilities just keep polyethylene beads in their wine tanks to absorb the TCA that their winery adds to the wine.

Here we are today. No more boiling cork in chlorinated water. Wineries aren’t using chlorine. So where does that taint come from? Lately, it’s been discovered that many pesticides and weed killers used by the owners of the forests contain chlorine. When UV light breaks down the chemicals, you wind up with trace amounts of chlorine (or our friend bromine) finding its way onto the bark.

The more we learn about TCA, the more we find ways of lessening its occurrence, yet it still happens at times. That’s where selecting the right manufacturer of cork can come into play…and that’s where our story continues…

BONUS BLOG POST FEATURE: Andy’s stupid party trick #58. Remember I mentioned polyethylene beads earlier? If you get a corked bottle of wine, pour the entire bottle into a Ziploc bag, evacuate the air, and seal it up. After about 15 minutes, most of the TCA will be absorbed into the plastic. Another method…plug your nose…latex gloves do this job quite nicely!